Advent 1. Luke 21;25–36 Fifty years ago people might occasionally have seen a miserable looking man wearing three large placards walking the streets of cities like London, declaring the end of the world was nigh. …

Solemnity of Christ the King

Last Sunday of the Year John 18;33–37 Since 1925 Pentecost ends with the solemn Christian acclamation of the Kingship of Christ. In England this was called “Stir up Sunday” from the collect before Advent. Typically …

Sunday October 31st this year will be widely celebrated as All Saints Sunday. This is of course a vast subject. But consider this: Pope John Paul II canonised more saints than any previous pope in …

The Solemnity of St. Olaf was celebrated as a major church feast in the Nordic countries until the Reformation. Then in the late 19th and the early 20th century a renewed interest in Olsok (“Olaf’s …

When St. Peter on Pentecost Day explains to the Jews that Christ is the Messiah, he sums up the salvific events by stating: “This Jesus God raised up, and of that all of us are …

A Reflection for Candlemas

How romantic it all seems, as recorded in Luke’s Gospel. The baby Jesus brought by Mary and Joseph to the Temple for the final act marking his birth, according to the Law of Moses. On …

In the Fullness of Time

«In the fullness of time God sent forth his son, born of a woman, born under the law» (Galatians 4:4). With this short but substantial phrase St. Paul sums up the mystery of the incarnation. …

New meditation on the UK website: “The Church is One and Holy”

The consecration of Bishop Jaroslaw Rafalko, elected bishop of the Western Diocese of the Polish National Catholic Church in October last year, was postponed due to the Covid-19 pandemic and finally set to September 14th, …

Fifty years ago people might occasionally have seen a miserable looking man wearing three large placards walking the streets of cities like London, declaring the end of the world was nigh. Today’s apocalyptic message of doom is promoted by the media twenty four hours every day. Throughout history there have been many times when people became aware of human vulnerability even the possibility of the extinction of homo sapiens. But today it must be true, that against the background of greater and greater scales of human power and far larger populations, such feelings of individual frailty and impotence will feel ever greater.

In addition we are experiencing the convergence of a whole series of threats at the same time from global warming, species extinction, social disorder, floods, fire, earthquakes and more, all in the context of a world pandemic. It can hardly be a surprise that mental health issues are increasing or that the young are too frightened to bring babies into the world. These grave matters must be taken seriously, while at the same time knowing that fatalism has been a regular feature of human history from the earliest times and also that there will be some religious sects who too readily become tempted to use present day events to claim knowledge of the mind of God. The end times have frequently been a fertile ground for fringe sects to distort and mislead the anxious and vulnerable. 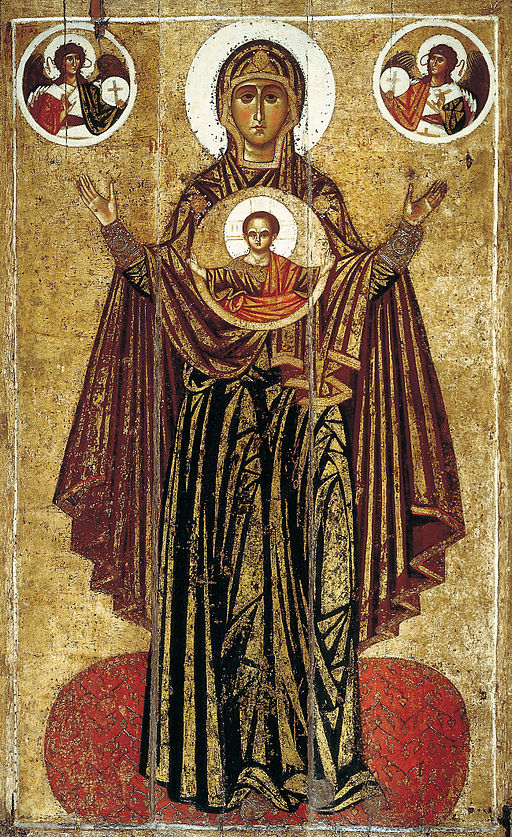 The Great Panagia (Our Lady of the Sign), 13th century, the Saviour Minster in Yaroslavl [Unknown author, Public domain]

For Christians Advent has been a time to look again at the Church’s consistent understanding and responses to any critical times. The extract from chapter 21 of St. Luke’s gospel is set in the context of a critical time before the Lord’s death when Jesus had said, “there will be signs….stress among the nations…men’s hearts will fail…” With such passages it would be too easy to cull predictions of the events taking place now, as some sects have done without referencing the context or the overall Apostolic teaching.

These remarks of Jesus were prompted when he saw a poor widow offering her pennies to the Temple treasury which was more than adequately adorned with beautiful jewels and treasures and where privileges of the scribes and injustice had been the subject of the Lord’s criticism. Jesus foresaw the collapse of this temple and its empty religion and the need for godly living to return. When Luke was writing thirty years later, the Temple had indeed been destroyed AD70 by the Romans, and Christians were facing persecution. Luke’s task was to offer hope and support to the faithful by recalling the warnings that Jesus had given of the collapse of the temple and Holy City and the trials and desolation that would follow. All of the followers of Jesus needed to know that judgement would often follow evil and they should remain confident in the Lord’s victory over evil and his promises never to forsake them to be alert and watchful and above all not to give in to despair as those without faith who are easily deceived and paralysed by fear. These passages are written to build courage and strength among the fledgling churches and not to fan the flames of doom.

Although religion has often been linked to the end times, some may have imagined that science and technology would deal a fatal blow to these things. Yet it is science itself that now seems to be fuelling the prophet of doom. Christians must remember that our battle is the same as that of Jesus between good and evil, truth and lies, life and death. That behind the science and politics these abound in the cultures of unbelief that give rise to increasing psychopathic social behaviour, lawlessness and criminality committed by States practicing torture and an ever more monstrous culture of death. These too are the signs of decline which we must confront, for “he who endures will be saved”.

Fathers Geoffrey Neal and Edward Bryant of the NCC UK Administration have launched a series of web meditations on the images and marks of the Church that have underpinned an orthodox vision, with the following main themes: The Church, the Creation and Gift of Christ The Church as Bride and Mother Church The Church Catholic …

Last Sunday of the Year John 18;33–37 Since 1925 Pentecost ends with the solemn Christian acclamation... END_OF_DOCUMENT_TOKEN_TO_BE_REPLACED

Sunday October 31st this year will be widely celebrated as All Saints Sunday. This is of... END_OF_DOCUMENT_TOKEN_TO_BE_REPLACED

The Solemnity of St. Olaf was celebrated as a major church feast in the Nordic countries... END_OF_DOCUMENT_TOKEN_TO_BE_REPLACED

When St. Peter on Pentecost Day explains to the Jews that Christ is the Messiah, he... END_OF_DOCUMENT_TOKEN_TO_BE_REPLACED

The Psalmist in his prophecy about Easter Day (Ps 118:24) says: «This is the day the... END_OF_DOCUMENT_TOKEN_TO_BE_REPLACED

How romantic it all seems, as recorded in Luke’s Gospel. The baby Jesus brought by Mary... END_OF_DOCUMENT_TOKEN_TO_BE_REPLACED

«In the fullness of time God sent forth his son, born of a woman, born under... END_OF_DOCUMENT_TOKEN_TO_BE_REPLACED

This meditation reflecting upon the meaning of the Creed’s word of the Church as “one” and... END_OF_DOCUMENT_TOKEN_TO_BE_REPLACED