The Second Sunday of Advent

“Prepare the way for the Lord” cried John the Baptist. While thinking about preparing, my mind turned to school inspectors, from a body known in the United Kingdom as OFSTED. Although their approach is more measured these days, it is not so long since news of an OFSTED inspection produced something like panic in schools. Normally after just a day or two’s notice, the inspectors descend, taking no special circumstances whatsoever into account: if the Head Teacher had had a nervous breakdown – sadly not a rare occurrence – too bad – they judged on what they saw, and many careers were destroyed. 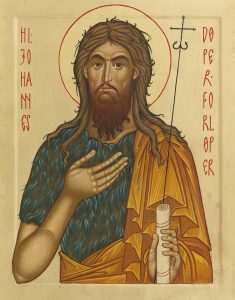 So we ask if Christians should not with equal seriousness prepare, as John the Baptist calls us, for the coming of the Lord? These are well known words, but words which may have been blunted through their very familiarity. Also in the United Kingdom today, Kings and Lords are abound but are largely toothless tigers: so, Lord this or Lord that is paying a visit to town, so what difference? After all, they are just human! My guess is that in the feudal society of medieval England, or indeed in the police state of Herod’s Palestine, things would have been very different.

So when John cried “Prepare the way for the Lord” my guess is that for many ordinary people it would have been a call to be ignored at their peril. If you weren’t ready, heaven protect you. Yet at another level, remember, all this happened at a time of great religious ferment, the Jews were expecting something momentous to happen, they believed that God was going to intervene decisively in his world, they were looking for the coming of a Messiah. So on both scores, ordinary people would have rushed to get themselves ready in every possible way for the coming of the great King. The mass baptisms undertaken by John, are proof enough of a great spiritual awakening among the people, even if for their own reasons, the rich and powerful, the upholders of the status quo chose to remain deaf.

What has this to teach us? We all know that, for a host of reasons, our faith grows stale. Two thousand years of Christian history have come and gone and still we sing “When comes the promised time, that war shall be no more?” We also know that the things of this world can so easily lure us away. It may be the sheer necessity of doing the household chores, it may that we simply give in to the prevailing culture and join the great throng of those who seem simply to live life for our own selves, heedless of others, careless of the things of God.

Advent is one of the most beautiful seasons of the Church’s year: it is rich with promise, it has wonderful music that almost aches for the return of the Lord in his glory. Every time we say the Creed we affirm our belief that one day, in God’s time, it will happen, and the age will close. Because we do not know when, because it seems sometimes as though it will never happen, the temptation is to put off getting our spiritual house in order, is to defer our preparations for the coming of the King to another time, when the things of this world are not pressing in so hard upon us. But it is precisely for that reason that we should act now; we should try to see ourselves through God’s eyes; eyes which express love, an infinite love, let it be said, but eyes which also express great sadness that we have strayed so much from his paths and followed our own devices and desires.

Busyness should never be an excuse for neglecting our souls; if our souls are right with God, then we can sit light to all the bustle and frantic activity that surrounds us and can so easily suck us in. If not, then we risk sinking under the pressures that we allow to rule our lives. A good resolve for Advent is the opening words of another old hymn – thy way, not mine O Lord. So let it be for us.

Reflection for Septuagesima Sunday Matthew 20;1–6 and Matthew 5;13–20. This reflection was provoked by a message... END_OF_DOCUMENT_TOKEN_TO_BE_REPLACED

Blessed are those who thirst for righteousness Matthew 5;6 Reflections at the end of January The... END_OF_DOCUMENT_TOKEN_TO_BE_REPLACED

The Feast of the Baptism of the Lord John 1;29-34 Psalm 42 speaks of a soul... END_OF_DOCUMENT_TOKEN_TO_BE_REPLACED

Solemnity of the Epiphany of the Lord John 1;1-14 Epiphany is one liturgical drama. It begins... END_OF_DOCUMENT_TOKEN_TO_BE_REPLACED

The Holy name of Jesus Luke 2;15-21 One of the great moments for a parent is... END_OF_DOCUMENT_TOKEN_TO_BE_REPLACED

Solemnity of the Nativity of the Lord John 1;1-14 Writing a homily for Christmas is made... END_OF_DOCUMENT_TOKEN_TO_BE_REPLACED

The Fourth Sunday of Advent Matt 1;18-25 I had a shock during the week. No, it... END_OF_DOCUMENT_TOKEN_TO_BE_REPLACED

The Third Sunday of Advent Matt 11;2-11 Two figures prepare us for the coming of Jesus... END_OF_DOCUMENT_TOKEN_TO_BE_REPLACED

The Second Sunday of Advent Matt 3;1-12 “Prepare the way for the Lord” cried John the... END_OF_DOCUMENT_TOKEN_TO_BE_REPLACED

Advent Sunday Matt 24;37-44 The writer Rod Dreher begins his book The Benedict Option with these... END_OF_DOCUMENT_TOKEN_TO_BE_REPLACED

Sunday before Advent, Christ the King Luke 23;33-43 In six months, Britain will witness the coronation... END_OF_DOCUMENT_TOKEN_TO_BE_REPLACED

2nd Sunday before Advent Remembrance Sunday Luke 21;5-19 One of the saddest things about growing old... END_OF_DOCUMENT_TOKEN_TO_BE_REPLACED

3rd. Sunday before Advent Luke 20;27-38 The Reflections using Luke’s gospel will end with the final... END_OF_DOCUMENT_TOKEN_TO_BE_REPLACED

All Saints Tide Would you like to be a saint? The whole idea of sainthood arouses... END_OF_DOCUMENT_TOKEN_TO_BE_REPLACED