Why Was Jesus Baptised?

Signs and signposts are essential for finding our way about. When car drivers first travelled from country to country they were often provided with a windscreen sticker to explain the different road signs. We all need signs, and nowhere more than in matters of faith to explain the meaning of an event in which the hand of God is believed to be at work. This is especially important today which is an age when many people have lost both the sense of transcendence and also the background information to pick up the clues that might help them in making sense of religious experience and in searching for more meaning and purpose to life.

The season of Epiphany is a time especially given to looking closely into accounts sometimes very well known in the lifetime of Jesus that the Church from earliest times regarded as signs that pointed to a deeper meaning. The Gospel of St John has twenty one chapters mainly revealing seven signs that may not even have been fully understood in his own time but in which this great mystic saw the hand of Almighty God at work. The very first of these took place when Jesus arrived in the small village of Cana in Galilee and changed water into wine and in so doing pointed prophetically to a dramatic development in sacred history. 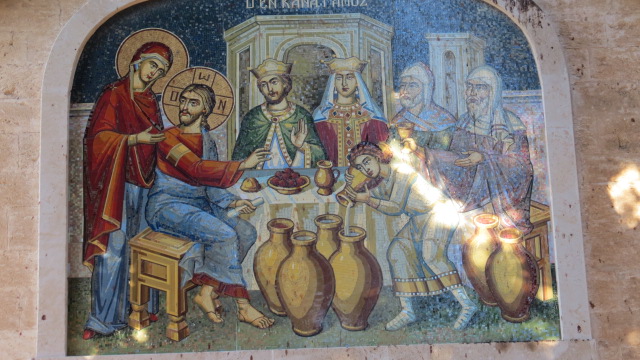 There is a special importance in the setting itself, because marriage was not only already a sign of the sacred union between God and the people of Israel but would become crucial to the way Christians would understand their communion with Christ who will lay down his life for the Church which is his bride. [St Paul uses this in his letter speaking of “the great mystery of Christ and his bride the Church”. Ephesians 5,32] The sign of the spousal bond returns in the conclusion of the Book of the Revelation. Here the Christ will come again in glory to claim his bride the Church. This spousal sign will be significant throughout the earthly ministry but for now the whole mission to create his bridal church can begin.

The second sign emerges from the first words, “on the third day” [John 2;1]. We are not told what third day this was a part of, but we do know that God had revealed himself to Moses on a third day, and Jesus had been raised from the dead on a third day. It seems that this was intended to be a similar third day sign. Especially so with a huge amount of water, 180 gallons, set aside in the Levitical laws for the Jewish rites of purification. This water Jesus transforms into wine because there had been a shortage. Jesus had not come to overthrow the Hebrew tradition but to fulfill it. Here was a clear parallel with the later feeding of the multitude that are preludes pointing to the abundance of the eternal life that flows from the Eucharist of his body and blood that are so crucial in becoming part of Christian self understanding.

Finally, for Jesus Cana is the beginning his missionary campaign. He has just gathered his small band of disciples and now everything must change. This all takes place with a change in the mother-son relationship. Hitherto Mary has played a quiet but important part in her son’s life. She is aware that she will suffer a pain greater than any birth, for Simeon had prophesied that by the sword of pain, her “heart will be pierced” [Luke 2;34.] Mary is a principal guest at the wedding, maybe she is a close relative. Her son, Jesus comes later and it is then that for the first time she, his mother, intercedes. “Whatever he says do it” [John 2; 5.]. This is a request that comes out of the needs of others but also a recognition of his authority. Mary is in her quiet action a model for us. Here the mother who had given birth to a child who has been subject to her, but now the role is reversed and she will play a supportive role until the end. In this way she has given life to his ministry that now goes out into the world and she the woman becomes subject to him, becoming the very first member of his Church. From this point the cross will overshadow everything as Jesus goes about transforming and bringing life out of death hope out of despair.Only by reflecting upon these signs are we able to begin the journey of faith and through our Lord’s Passion and Resurrection.

Reflection for Septuagesima Sunday Matthew 20;1–6 and Matthew 5;13–20. This reflection was provoked by a message... END_OF_DOCUMENT_TOKEN_TO_BE_REPLACED

Blessed are those who thirst for righteousness Matthew 5;6 Reflections at the end of January The... END_OF_DOCUMENT_TOKEN_TO_BE_REPLACED

The Feast of the Baptism of the Lord John 1;29-34 Psalm 42 speaks of a soul... END_OF_DOCUMENT_TOKEN_TO_BE_REPLACED

Solemnity of the Epiphany of the Lord John 1;1-14 Epiphany is one liturgical drama. It begins... END_OF_DOCUMENT_TOKEN_TO_BE_REPLACED

The Holy name of Jesus Luke 2;15-21 One of the great moments for a parent is... END_OF_DOCUMENT_TOKEN_TO_BE_REPLACED

Solemnity of the Nativity of the Lord John 1;1-14 Writing a homily for Christmas is made... END_OF_DOCUMENT_TOKEN_TO_BE_REPLACED

The Fourth Sunday of Advent Matt 1;18-25 I had a shock during the week. No, it... END_OF_DOCUMENT_TOKEN_TO_BE_REPLACED

The Third Sunday of Advent Matt 11;2-11 Two figures prepare us for the coming of Jesus... END_OF_DOCUMENT_TOKEN_TO_BE_REPLACED

The Second Sunday of Advent Matt 3;1-12 “Prepare the way for the Lord” cried John the... END_OF_DOCUMENT_TOKEN_TO_BE_REPLACED

Advent Sunday Matt 24;37-44 The writer Rod Dreher begins his book The Benedict Option with these... END_OF_DOCUMENT_TOKEN_TO_BE_REPLACED

Sunday before Advent, Christ the King Luke 23;33-43 In six months, Britain will witness the coronation... END_OF_DOCUMENT_TOKEN_TO_BE_REPLACED

2nd Sunday before Advent Remembrance Sunday Luke 21;5-19 One of the saddest things about growing old... END_OF_DOCUMENT_TOKEN_TO_BE_REPLACED

3rd. Sunday before Advent Luke 20;27-38 The Reflections using Luke’s gospel will end with the final... END_OF_DOCUMENT_TOKEN_TO_BE_REPLACED

All Saints Tide Would you like to be a saint? The whole idea of sainthood arouses... END_OF_DOCUMENT_TOKEN_TO_BE_REPLACED