When St. Peter on Pentecost Day explains to the Jews that Christ is the Messiah, he sums up the salvific events by stating: “This Jesus God raised up, and of that all of us are witnesses. Being therefore exalted at the right hand of God, and having received from the Father the promise of the Holy Spirit, he has poured out this, which you yourselves are seeing and hearing” (Acts 2:32f). In this quotation which is perhaps the earliest testimony of the preaching in the primitive church, Peter paradoxically presents the outpouring of the Spirit as a consequence of the enthronement of Christ, which follows from His death and resurrection. This inner connection between Easter, Ascension and Pentecost is similarly maintained by St. Paul in a hymn which he quotes in his Letter to the Philippians:

Christ became obedient to the point of death
— even death on a cross.
Therefore God also highly exalted him
and gave him the name
that is above every name,
so that at the name of Jesus
every knee should bend,
in heaven and on earth and under the earth,
and every tongue should confess
that Jesus Christ is Lord,
to the glory of God the Father. (2:8-11)

Explaining the meaning of Christ’s death on the cross in this way, the primitive church not only presents Christ to us as resurrected from the tomb but also as ascended to heaven sitting as the Lord at the right hand of God the Father. Thus, the proclamation of the Kingship of Christ takes us one step further than the Easter story. Exalted by God the Father, Christ is the Lord, enthroned in Glory. 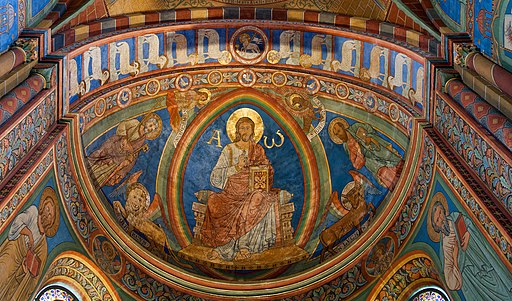 The Kingship of Christ

In fact, this imagery is taken from Oriental Court ritual. On solemn occasions the Crown Prince enjoys the privileged position of sitting next to the Monarch. The early church was familiar with this kind of language, from royal psalms in The Old Testament:

The Lord said to my Lord, sit at my right hand,
till I make your enemies your foot-stool,
the Lord shall send the rod of your strength out of Zion.
Rule in the midst of your enemies! (Ps. 110, cf. Ps. 2)

As a matter of fact, Jesus had himself quoted from this psalm in order to express his status as the Messiah. Moreover, in times of trouble the early church took comfort from Christ’s power at the right hand of the Father (Heb 1:3ff).

Still, the Lord’s enthronement in glory does not mean that all is now peaceful. During her pilgrimage in time, until Christ’s return in Glory, the Church Militant is attacked by spiritual enemies making war against the saints because they “keep the commandments of God and have the testimony of Jesus Christ” (Rev 12:17, 14:12). In this way the criterion for persecution is faithfulness. With apocalyptic names taken from the Old Testament these foes of the faith are metaphorically characterised as aggressive animals like the Snake, the Dragon and the Beast (Rev. 2:17; 13:15). Moreover, all the powers who deny or revolt against the Lordship of Christ are summed up in the letters of St. John as Antichrist, the deceiving Liar (2 John. 2:7, cf. John 8:44). Cunningly, the Antichrist tries to lure the believers away from the faith by instituting a false religion while at the same time also using the world of unbelief as an instrument for his rage against the Christians.

The inner secularisation of the churches

In the same manner, St. Paul cautions the Corinthians of “the god of this age (who) has blinded the minds of unbelievers, so that they cannot see the light of the gospel that displays the glory of Christ, who is the image of God”. This spiritual blindness can only be healed by proclaiming “Jesus as Lord”, he concludes (2 Cor 4:4f). Furthermore, in his letter to the Thessalonians the Apostle points to the threat coming from inside the church, warning the faithful of “the mystery of lawlessness which is at work in the temple of God”. “The lawless one” will cause a general falling away from Christ the Lord (2 Thess 2:3ff).

Today, the danger of spiritual blindness remains as a real threat to the faith. By reducing the horizon of living in the world to “me, here and now”, the postmodern culture may impress upon us the idea that the purpose of life is simply me and my happiness. This egocentricity is inherently atheistic destroying Christianity from within. There is no God given creation, no common bonds between men, no Gospel to proclaim for mankind’s salvation as the faith has become a private inner disposition. Accordingly, religion serves only a therapeutic purpose – the feeling of personal well-being. As each one of us is our own master in a post-truth society, only private experience can authenticate my faith. “Faith” is practised as a private patchwork of notions and feelings ironically characterised as “google buddhism”.

The liberal dilemma and woke authoritarianism

The problem of authority in a society without social coherence has become a palpable problem in the present secular culture. If social conflicts arise in our multicultural society it is seen as the task of the State to function as umpire balancing the rights and obligations between diverse social groups and alternative interests to ensure that there are no constraints on the individual’s right to self-fulfillment. The liberal dilemma is then how to impose judgements without becoming partisan in favour of the winning part.

However, in the aftermath of postmodernism there is no pattern given in human life, no goal oriented force or unified common standard which can serve as neutral ground. In this vacuum there are no binding common standard for thinking and acting. Equal rights have led to George Orwell’s insight in Animal Farm: “All animals are equal but some are more equal than others”. In the end normative directions are based on the authoritarian power to impose political correctness. Today woke authoritarianism is taking more and more control of society by means of militant subjectivism. In a post-truth society the definition of truth is: “Act as you are told – or we take you to court.” The misuse of legal power threatens so-called “cognitive minorities”.

In this cultural war the challenge for the Christian understanding of truth is essentially connected with factual claims: “If Christ is not risen”, St. Paul explains to the Corinthians who based their faith on private experiences, “your faith is futile, you are still in your sins” (1 Cor 1 5:17). The Gospel narrative leads into a pattern of doctrine as the Apostle maintains in his Letter to the Romans: “If you confess with your lips that Jesus is Lord and believe in your heart that God raised him from the dead, you will be saved” (Rom.10:9f, cf 1 Cor 8:6. ). This confession of the Lordship of Christ takes place in the act of baptism and in power of the Holy Spirit: “No one can say that Jesus is Lord except by the Holy Spirit” (12:3, cf. 8:6).

The Church as a community of faith

Despite the personal importance this confession has for the individual’s life, the profession of faith does not lead him or her into private relationship with Jesus. On the contrary, the conversion and the confession of faith places the new born in the community of those who believe in Christ as the Lord: “For as many of you as were baptised into Christ have clothed yourselves with Christ. There is no longer Jew or Greek, there is no longer slave or free, there is no longer male and female; for all of you are one in Christ Jesus” (Gal. 2:27f). Thus, the Christian faith invites the individual to find his or her identity in relationships, by bonding with others who share the same faith in Christ. Without any basis in a binding narrative, the Gospel is transformed into mystical images and vague notions, justified by their therapeutic or political usefulness. There is no place for the faith of the Church as professed in the Creeds. For most modern Christians it is inconceivable that Christian faith should be the only way of salvation. Christianity thus presented is conceptually bankrupt.

Serving Christ in joy and peace

The purpose of Christian faith is to grow in holiness and to do so in a community. Both goals are fulfilled in the Holy Spirit given to the Church on the Day of Pentecost. This presence of the Spirit comes to us today as an anticipation of the Kingdom of God which is “righteousness, peace and joy in the Holy Spirit” (Rom 14:17). The Holy Spirit is the foundation of the Church as a holy temple and at the same time the source of richness and joy among the faithful. The Spirit, the Paraclete, calls us to wholehearted commitment and attentiveness to the Lord. In this way the role of the Spirit is to bring us to accept and comprehend the new reality given to us in the Resurrection of Christ. My fidelity as a member of the Church in these difficult times is to respond to Jesus who “loved me and gave himself for me” (Gal 2:20). For in him we are blessed and empowered to serve in righteousness and peace in the Holy Spirit. So let us live and walk in the Spirit so that we can reap “the fruit of the Spirit” – love, joy and peace and faithfulness (Gal 5:23f).

May Pentecost be a time of joyful renewal to you!
+ Roald Nikolai

Reflection for Septuagesima Sunday Matthew 20;1–6 and Matthew 5;13–20. This reflection was provoked by a message... END_OF_DOCUMENT_TOKEN_TO_BE_REPLACED

Blessed are those who thirst for righteousness Matthew 5;6 Reflections at the end of January The... END_OF_DOCUMENT_TOKEN_TO_BE_REPLACED

The Feast of the Baptism of the Lord John 1;29-34 Psalm 42 speaks of a soul... END_OF_DOCUMENT_TOKEN_TO_BE_REPLACED

Solemnity of the Epiphany of the Lord John 1;1-14 Epiphany is one liturgical drama. It begins... END_OF_DOCUMENT_TOKEN_TO_BE_REPLACED

The Holy name of Jesus Luke 2;15-21 One of the great moments for a parent is... END_OF_DOCUMENT_TOKEN_TO_BE_REPLACED

Solemnity of the Nativity of the Lord John 1;1-14 Writing a homily for Christmas is made... END_OF_DOCUMENT_TOKEN_TO_BE_REPLACED

The Fourth Sunday of Advent Matt 1;18-25 I had a shock during the week. No, it... END_OF_DOCUMENT_TOKEN_TO_BE_REPLACED

The Third Sunday of Advent Matt 11;2-11 Two figures prepare us for the coming of Jesus... END_OF_DOCUMENT_TOKEN_TO_BE_REPLACED

The Second Sunday of Advent Matt 3;1-12 “Prepare the way for the Lord” cried John the... END_OF_DOCUMENT_TOKEN_TO_BE_REPLACED

Advent Sunday Matt 24;37-44 The writer Rod Dreher begins his book The Benedict Option with these... END_OF_DOCUMENT_TOKEN_TO_BE_REPLACED

Sunday before Advent, Christ the King Luke 23;33-43 In six months, Britain will witness the coronation... END_OF_DOCUMENT_TOKEN_TO_BE_REPLACED

2nd Sunday before Advent Remembrance Sunday Luke 21;5-19 One of the saddest things about growing old... END_OF_DOCUMENT_TOKEN_TO_BE_REPLACED

3rd. Sunday before Advent Luke 20;27-38 The Reflections using Luke’s gospel will end with the final... END_OF_DOCUMENT_TOKEN_TO_BE_REPLACED

All Saints Tide Would you like to be a saint? The whole idea of sainthood arouses... END_OF_DOCUMENT_TOKEN_TO_BE_REPLACED