Full of Grace and Truth

Writing a homily for Christmas is made more difficult by the many homemade ideas that people cling to that are unreliable and have little to do with the truth of the incarnation that the Church first received from the Apostles. There are are at least three popular man made ideas that undermine the teaching of the Christian creed: 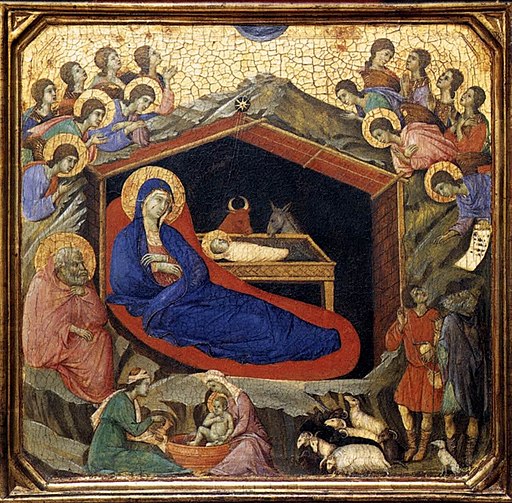 Christmas in the Church often begins with St John’s Gospel telling a very different story! No shepherds or wise men, no little animals or twinkling stars but St John, a theologian and thinker saying: “In the beginning was the Word, and the Word was God”. Jesus Christ, he tells us was the Word and Son of God and “was begotten of the Father before all worlds”. St. John does not begin the coming of Christ as a baby in Bethlehem, for the mystery of His birth was not “His beginning” (as the popular view supposes). He had existed as the Word of God the Son of God since creation was begun. This Word was revealed by the great Hebrew prophets. God’s Chosen People, the Jews, did not, as a whole, receive the Word as spoken by the prophets or believe in Him later when he lived on earth. They ended up by killing Him. But some believed in Him, and St John affirms that “to as many as received Him He gave the Power to become the Sons of God”. There was a purpose in his coming, and that was to save or set free the souls of humanity.

St John who had a special insight with his close friend of Jesus, and who took care of the Lord’s mother Mary in later life. John must have pondered these mysteries for many years before setting them down in his Gospel. He says precisely this in his final verses of his gospel, “And there are also many other things which Jesus did, which, if they should be written, I suppose that even the world itself could not contain the books that should be written.”

The Church of God, began on the feast of Pentecost guided by the Holy Spirit, and with the same Spirit has continued to develop her understanding of those things the followers had witnessed, finally writing things down more than fifty years after Jesus had been crucified and overcome death. We are challenged today by ideas that are not part of the written scriptures or the revelation handed down within the Church. So much that people have come to believe is simply man made, and are pitifully inadequate theories especially about the person of Jesus Christ and what he brings to our human predicament.

There are other really important beliefs which are the foundation of the Church’s teaching about Jesus Christ and why he came to live as a man. If people have indulged in fake beliefs sometimes going right back to their childhood, it is our duty to try and correct. Not always easy, but sometimes in this secular age they will actually be grateful, because more and more people are dissatisfied with the Secular Agenda which is always changing its moral position, and is drowning in lies and propaganda. Done sensitively we may have the best opportunities now to correct errors and guided by the Holy Spirit we may lead others who wish to hear, back to the real truth.

Our team of contributors wish all our friends a Happy Christmas with God’s blessing in the witness and ministry we are called to undertake.

Reflection for Septuagesima Sunday Matthew 20;1–6 and Matthew 5;13–20. This reflection was provoked by a message... END_OF_DOCUMENT_TOKEN_TO_BE_REPLACED

Blessed are those who thirst for righteousness Matthew 5;6 Reflections at the end of January The... END_OF_DOCUMENT_TOKEN_TO_BE_REPLACED

The Feast of the Baptism of the Lord John 1;29-34 Psalm 42 speaks of a soul... END_OF_DOCUMENT_TOKEN_TO_BE_REPLACED

Solemnity of the Epiphany of the Lord John 1;1-14 Epiphany is one liturgical drama. It begins... END_OF_DOCUMENT_TOKEN_TO_BE_REPLACED

The Holy name of Jesus Luke 2;15-21 One of the great moments for a parent is... END_OF_DOCUMENT_TOKEN_TO_BE_REPLACED

Solemnity of the Nativity of the Lord John 1;1-14 Writing a homily for Christmas is made... END_OF_DOCUMENT_TOKEN_TO_BE_REPLACED

The Fourth Sunday of Advent Matt 1;18-25 I had a shock during the week. No, it... END_OF_DOCUMENT_TOKEN_TO_BE_REPLACED

The Third Sunday of Advent Matt 11;2-11 Two figures prepare us for the coming of Jesus... END_OF_DOCUMENT_TOKEN_TO_BE_REPLACED

The Second Sunday of Advent Matt 3;1-12 “Prepare the way for the Lord” cried John the... END_OF_DOCUMENT_TOKEN_TO_BE_REPLACED

Advent Sunday Matt 24;37-44 The writer Rod Dreher begins his book The Benedict Option with these... END_OF_DOCUMENT_TOKEN_TO_BE_REPLACED

Sunday before Advent, Christ the King Luke 23;33-43 In six months, Britain will witness the coronation... END_OF_DOCUMENT_TOKEN_TO_BE_REPLACED

2nd Sunday before Advent Remembrance Sunday Luke 21;5-19 One of the saddest things about growing old... END_OF_DOCUMENT_TOKEN_TO_BE_REPLACED

3rd. Sunday before Advent Luke 20;27-38 The Reflections using Luke’s gospel will end with the final... END_OF_DOCUMENT_TOKEN_TO_BE_REPLACED

All Saints Tide Would you like to be a saint? The whole idea of sainthood arouses... END_OF_DOCUMENT_TOKEN_TO_BE_REPLACED