The Symbols of Christmas

Why Was Jesus Baptised?

The Epiphany of the Lord

Is it true, this fantastic story of wise men from the East coming to worship the baby Jesus? There is probably a bit in all of us that says that it couldn’t possibly have happened in this way – it seems to stretch credibility too far, so is it true?. The question of truth with regard to the Scriptures is a big one, and it can be taken at different levels. For example, the account of the Creation in Genesis is not these days generally accepted as literal truth – there is simply too much scientific evidence for evolution over a period of millions of years.

That however does not in any way detract from the religious truth of the story, for it tells us that the world is God’s creation, that he loves it, that there is beauty and order in creation, and that men and women are made in God’s image and so on. So when it comes to the journey with the Wise Men, before we simply dismiss it as a piece of beautiful but fanciful writing on Matthew’s part, we do need to remind ourselves that the Middle Eastern world of two thousand years ago was very different from the world of today and truth or wisdom come not just literally but in many ways.

There were Wise Men – Magi, astrologers – in abundance in the ancient world, they did study the stars, they did believe that important messages came to them in that way, they were prepared to travel long distances in search of the truth; further, it appears that at about the time of Jesus’ birth, there were strange phenomena apparent in the stars, even if we now know that a star would not literally go in front of people to guide them; we also know that Herod the king really was paranoid – he trusted no one and in the process had his wife and mother in law and three of his sons assassinated. For all these reasons, therefore, and, yes, recognising that there are problems with the story, we still should not be too ready to dismiss it as a mere flight of fancy. 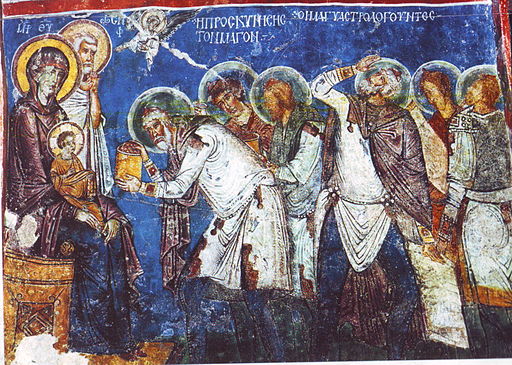 But beyond the literal level of the text, there are important religious truths contained in this passage. For now, just consider on one point, namely that these men were not Jews. It is one of the wonders of Christianity that it exists at all. At the time of the first Pentecost, and for some years afterwards, it was really little more than a Jewish sect. Had it remained so, it would almost without question have died out when the Romans smashed the Jewish nation in the year AD70. But before then, men of vision, and notably St Paul, had helped the new faith to break the bonds of Judaism and set it on the path to becoming a faith for the whole world.

The point about the Epiphany, grandly subtitled the Manifestation of Christ to the Gentiles in the English Book of Common Prayer, is that right from his birth the Lord Jesus is shown to be Lord of all, and not simply another Jewish prophet. The Wise Men come looking for the one born King of the Jews, but they acknowledge his dominion over them as non-Jews also as they present their gifts to him. This child born in obscurity to a humble Jewish family is to change the world, and the world, in the shape of the Wise Men comes to pay him homage.

Our task is twofold: first to join with the Wise Men in the symbolic offering of our lives to the Lord Jesus, but second to play our part in the ongoing manifestation or revealing of Jesus to the world, for there is great ignorance about who Jesus is, as great as that shown by Herod. And we will be doing our part by the kinds of lives we lead and by the words we say. As St Paul puts it, we are all ambassadors for Christ, by virtue of our baptism, and we must take this calling not as an imposition but as a wonderful opportunity to bring Christ to the world, and the world to Christ.

Third Sunday after Epiphany Luke 4,14-21 Jesus returns to Nazareth, his home town, as was his... END_OF_DOCUMENT_TOKEN_TO_BE_REPLACED

Second Sunday after Epiphany John 2,1-11 Signs and signposts are essential for finding our way about.... END_OF_DOCUMENT_TOKEN_TO_BE_REPLACED

The Epiphany of the Lord Matt 2,1–12 Is it true, this fantastic story of wise men... END_OF_DOCUMENT_TOKEN_TO_BE_REPLACED

The Nativity of the Lord Luke 2,15–20 Early in September the British public were hearing that... END_OF_DOCUMENT_TOKEN_TO_BE_REPLACED

Third Sunday of Advent Luke 3,7-18 The stark message of John the Baptist is “Repentance for... END_OF_DOCUMENT_TOKEN_TO_BE_REPLACED

Second Sunday of Advent Luke 3;1-6 Imagine that you’ve just had a message from God. He... END_OF_DOCUMENT_TOKEN_TO_BE_REPLACED

Last Sunday of the Year John 18;33–37 Since 1925 Pentecost ends with the solemn Christian acclamation... END_OF_DOCUMENT_TOKEN_TO_BE_REPLACED