Solemnity of the Resurrection of the Lord 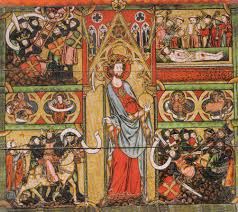 As we are approaching the Solemnity of St. Olaf on July 29, it must be said that the memory of the patron saint of Norway is very much alive. He is still a part of our cultural heritage in the Nordic countries and this year we celebrate the millennium of his baptism in Rouen i 1014.

Over the years his sainthood has in some quarters also been met with irony and scepticism – Can a viking mercenary with bloody hands be called a saint? Of course, the Medieval Church did not necessarily evaluate the criteria for sainthood as an expression of personal «holiness». Thus St. Olaf was honoured as martyr and not for his private piety.

The complicated personality of the viking king is clearly expressed in the iconography of St. Olaf. His attributes are a crown, an axe and an allegorical creature underneath his feet. The crown places him among Christian kings like Constantine and Charlemagne. The axe expresses on the one hand his authority as lawmaker, but serves also as a reminder that the axe was the instrument of his martyrium. The dragon under his feet carries a face like his own and is usually interpreted as an allegorical expression of his struggle for a better self. In short, St. Olaf was seen to be a soldier of God protecting laws of society, a royal martyr and a saint who triumphed over evil.

St. Olaf was the first saint to be recognised in Scandinavia. Within the Nordic region, the shrine of St. Olaf in Nidaros (Trondheim) was the oldest known and most important destination for pilgrims. Churches were dedicated to his name from Greenland to Constantinople. Not least in England was this saint popular, with seven churches dedicated to him in London alone. 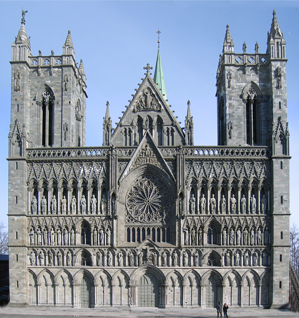 It is estimated that in the Middle Ages around 40 000 took part in the yearly pilgrimage to his grave in the cathedral at Nidaros. All this came to an end after 1537 when the Danish King Christian III invaded Norway. He realised that the political importance of St. Olaf as a symbol of Norwegian statehood – Rex Perpetuus Norvegiae – needed to be destroyed, and he also had an eye on the riches of the cathedral. But that is the beginning of another story – the decline of Norway in the centuries following the Reformation.

Fifth Sunday of Easter John 13;31-35 We have followed the events of the Passion, the Cross... END_OF_DOCUMENT_TOKEN_TO_BE_REPLACED

Fourth Sunday of Easter John 10;22-30 How often when we ask a question have we already... END_OF_DOCUMENT_TOKEN_TO_BE_REPLACED

Eastertide Luke 20;1-18 In my student days many seminarians were helped by the work of London’s... END_OF_DOCUMENT_TOKEN_TO_BE_REPLACED

Palm Sunday Luke 22;14-56 Let us reflect on Jesus speaking of himself as “the bread of... END_OF_DOCUMENT_TOKEN_TO_BE_REPLACED

Fifth Sunday of Lent John 12;1-8 Jesus travelled with twelve disciples, but also had a considerable... END_OF_DOCUMENT_TOKEN_TO_BE_REPLACED