As we are approaching the Solemnity of St. Olaf on the 29th of July, it must be said that the memory of the patron saint of Norway is still very much alive. Olaf Haraldson is the king to whom the spread of Christianity through Scandinavia is attributed, at least in most of the later written sources. A large number of sources tell of his life. Olaf was a descendant of Harald Fairhair, a prince from South-Eastern Norway who, after having temporarily subdued the Earls in Western Norway in the battle of Hafrsfjord in 872, erected a fragile kingdom. In a similar battle, but fighting in the name of Christ against the so-called coastal aristocracy united with the yeomanry of Troendelag, Olaf was killed in 1030 at Stiklestad about 100 km north of Trondheim.

The cult of St. Olaf and the pilgrimage to Nidaros 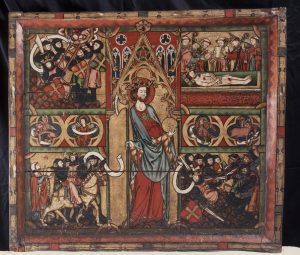 Olaf swiftly became Norway’s patron saint; his canonisation was performed only a year after his death in Nidaros by the English Bishop Grimketel. The cult of Olaf not only unified the country, it also fulfilled the conversion of the nation, something for which the king had fought so hard.

In 1032 the first pilgrims walked to Nidaros to visit his grave and the cult of St. Olaf spread with surprising speed all over the Nordic countries and other parts of Europe. The earliest written account of a pilgrimage is from 1108. In the beginning the pilgrims would be only a part of those travelling along the road but they would have been walking as a distinct group wearing pilgrims clothing and distinctions. To improve the walking conditions along the pilgrim routes, the church imposed bridge building as a penance and gave indulgences for it. Setting the norms for road building, the Crown also granted general safety for pilgrims and built for their protection shelters and resting-houses at 30-40 km distance along the main roads. The pilgrims were also given royal privileges such as free fodder and pasture for the horses.

In 1032 the first pilgrims walked to Nidaros to visit his grave and the cult of St. Olaf spread with surprising speed all over the Nordic countries and other parts of Europe. The earliest written account of a pilgrimage is from 1108. In the beginning the pilgrims would be only a part of those travelling along the road but they would have been walking as a distinct group wearing pilgrims clothing and distinctions. To improve the walking conditions along the pilgrim routes, the church imposed bridge building as a penance and gave indulgences for it. Setting the norms for road building, the Crown also granted general safety for pilgrims and built for their protection shelters and resting-houses at 30-40 km distance along the main roads. The pilgrims were also given royal privileges such as free fodder and pasture for the horses. 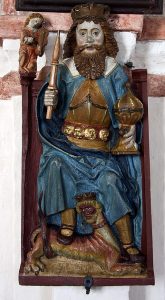 St. Olaf was the first saint to be recognised in Scandinavia. Within the Nordic region, the shrine of St. Olaf in Nidaros was the oldest known and most important destination for pilgrims. Churches were dedicated to his name from Greenland to Constantinople. The oldest surviving painting of Saint Olaf, around 1160 AD, is on a column in the Nativity Church in Bethlehem. The number of Olaf churches and chapels reminds us that the Saint Olav tradition once flourished all over northern Europe. Prior to the Reformation, we know of at least 340 Olaf churches and Olaf chapels of which 288 were outside Norway. In Sweden, more than 75 churches were dedicated to Saint Olaf, in Denmark around 20 and in Finland at least 13.

Not least in England was this saint popular, with seven churches dedicated to him in London alone. It is interesting to note that the oldest liturgical texts about St. Olaf were written in England. Typologically, St. Olaf belongs to a group of Royal saints, such as Edward the Confessor.

Politically, the cult served the interests of the Norwegian Crown as Olaf’s status as saint legitimised the family’s claim to the Norwegian throne. Therefore the spread of the cult of St. Olaf throughout much of Northern Europe had more than a religious impact. It influenced the social and political life of Scandinavia, England, Normandy and the Baltics.

Decline of the pilgrimages in the Middle Ages

It has been estimated that in the Middle Ages around 40,000 people took part in the yearly pilgrimage to his grave in the cathedral at Nidaros. In 1292 Pope Nicholas IV acknowledged indulgence for one year to those who visited Nidaros. Consequently, the great popularity of St. Olaf in Northern Europe made Nidaros one of the most visited pilgrim goals along with Compostella, Jerusalem, Rome and Canterbury. The importance of the pilgrimages is demonstrated when Pope Bonifacius VIII declared that coming to Rome in the Jubilee year in 1300 would give complete indulgence and the city was visited probably by more than 200,000.

The subsequent general decline of pilgrimages in the high Middle Ages is usually attributed to the fact that the Vatican had begun to sell general indulgences. In this way the penitents could buy themselves out of the discomfort of traveling to holy places. Meanwhile, the pilgrimages changed character becoming a form of popular entertainment. Thus Chaucer’s Canterbury Tales from the end of the 14th century probably gives a realistic picture of the folksy frivolity of pilgrimages in the second part of the 14th century.

Furthermore, catastrophic for the pilgrimages to Nidaros was the arrival of the Black Death to Norway in the year 1350. Subsequent epidemics of bubonic plague in the years 1360 and 1370 reduced the population by half. Despite these adversaries, the veneration of St. Olaf seems to have continued on a large scale up to the Reformation which came to Norway as a spiritual and political bombshell.

The end of pilgrimages to Nidaros is therefore directly connected with the year 1537 when the Danish King Christian III invaded Norway and – without any spiritual preparation – declared that the country from now on was to be a part of Lutheran Denmark. He realised that in order to accomplish this, the political importance of St. Olaf – Rex Perpetuus Norvegiae – as a symbol of Norwegian statehood needed to be destroyed. Moreover, he also had an eye on the riches of the cathedral in Nidaros.

The body of St. Olaf had been taken to safety by the last Archbishop. After his departure from Norway in 1537, the corpse later came into the possesion of Swedish soldiers invading Trondheim in 1564, who are said to have reburied the saint in the choir of the cathedral at a now unknown location. Before that, the new Danish authorities had in 1540 confiscated the large Silver Shrine of the Saint with two royal crowns which together with other liturgical treasures of the Cathedral were moved to Copenhagen and later sold to the Margrave of Pfalz.

Meanwhile, the Norwegian population continued to honour the St. Olaf traditions, but mostly in secret. Fearing to loose control, the new Danish authorities, at the Convention of the Lords of the Realm (Herrentag) at Larvik in 1611, declared the pilgrimage illegal upon punishment of death. Still, there were underground Catholic parishes in Southern Norway until the second part of the century. Likewise, there are among the Lutheran yeomandry documented clandestine St. Olaf celebrations involving processions with icons and candles.

Only in the 20th century people started again to come to Trondheim as pilgrims to venerate St. Olaf, specifically in connection with the revitalised celebration of St. Olaf. Groups from different denominations began during the 1970s and ‘80s on their own private initiative to walk “St. Olaf’s way” to the Nidaros Cathedral in Trondheim. 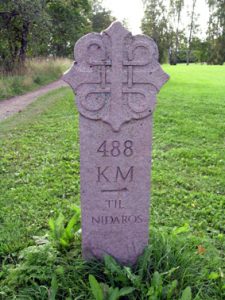 Ecclesial and secular authorities joined to make this pilgrimage possible from a practical viewpoint. Since the restoring and signposting of the pilgrim path started in 1993, more than 5000 kilometer along the nine main routes through Denmark, Sweden and Norway have been marked with the St. Olav logo. On July 29th 1997 the main path was officially opened by Crown Prince Haakon, and in 2010 St. Olaf’s way with all paths leading to Nidaros was certified as Cultural Route of the Council of Europe.

According to registrations collected by the National Pilgrim Center, the number of pilgrims has been increasing during the last decade. In 2019 it is estimated that more than 22,000 pilgrims took part in the wanderings towards Nidaros, of which at least 1,500 were so-called “long” pilgrims, mostly from Germany.

Who was St. Olaf?

The sanctification of St. Olaf at the time was instrumental in breaking down the opposition against both christianity and the unification of the country under one king. Today Olaf Haraldson’s sainthood is in some quarters met with irony and scepticism. The question is: Can a viking mercenary who died in his thirtieth major battle with so much blood on hands be called a saint? However, the Medieval Church did not necessarily evaluate the criteria for sainthood as an expression of personal «holiness». Thus St. Olaf was honoured as martyr and not for his personal piety.

Bishop Grimketel’s canonisation of Olaf was confirmed by Pope Alexander III in 1164. He is also a canonised saint in Orthodoxy and therefore one of the last famous Western saints before the Great Schism.

St. Olaf’s Feast Day was celebrated on the 29th of July, the day of his death, as a major church feast in the Nordic countries until the Reformation. Then in the late 19th and the early 20th century a renewed interest in Olsok (“Olaf’s Vigil”) aroused, and on the 29th of July 1930 the feast was reintroduced in connection with the official celebration of the 900th anniversary of St. Olaf’s death at Stiklestad.

The complicated personality of the viking king is clearly expressed in the iconography of St. Olaf. His attributes are a crown, an axe and an allegorical creature underneath his feet. The crown places him among Christian kings like Constantine and Charlemagne. The axe expresses on the one hand his authority as lawmaker, but serves also as a reminder that the axe was the instrument of his martyrdom. The dragon under his feet carries a face like his own and is usually interpreted as an allegorical expression of his struggle for a better self. In short, St. Olaf was seen to be a soldier of God protecting laws of society, a royal martyr and a saint who triumphed over evil.

St. Olav honoured on his feast day
at the West Front of the Nidaros Cathedral.

The Solemnity of St. Olaf was celebrated as a major church feast in the Nordic countries... END_OF_DOCUMENT_TOKEN_TO_BE_REPLACED

When St. Peter on Pentecost Day explains to the Jews that Christ is the Messiah, he... END_OF_DOCUMENT_TOKEN_TO_BE_REPLACED

The Psalmist in his prophecy about Easter Day (Ps 118:24) says: «This is the day the... END_OF_DOCUMENT_TOKEN_TO_BE_REPLACED

How romantic it all seems, as recorded in Luke’s Gospel. The baby Jesus brought by Mary... END_OF_DOCUMENT_TOKEN_TO_BE_REPLACED

«In the fullness of time God sent forth his son, born of a woman, born under... END_OF_DOCUMENT_TOKEN_TO_BE_REPLACED

This meditation reflecting upon the meaning of the Creed’s word of the Church as “one” and... END_OF_DOCUMENT_TOKEN_TO_BE_REPLACED

The consecration of Bishop Jaroslaw Rafalko, elected bishop of the Western Diocese of the Polish National... END_OF_DOCUMENT_TOKEN_TO_BE_REPLACED

As we are approaching the Solemnity of St. Olaf on the 29th of July, it must... END_OF_DOCUMENT_TOKEN_TO_BE_REPLACED

Fathers Geoffrey Neal and Edward Bryant of the NCC UK Administration have launched a series of... END_OF_DOCUMENT_TOKEN_TO_BE_REPLACED

International Video Conference – Rescheduled for October
Video Conference in preparation for the Mainz Conference II (February 2022). Invitations with call-in and program details will be available soon.