Full of Grace and Truth

The Fourth Sunday of Advent

I had a shock during the week. No, it wasn’t anything like the post arriving before mid afternoon, but something of a quite different order. I had occasion to be in the local main car dealers, and got talking to the young woman receptionist. And she casually mentioned her husband. Husband? What kind of word is that? What kind of world is she living in? Surely we have progressed beyond all that dreary patriarchal enslavement of womankind? Well, because I am not ashamed to be counter-cultural, indeed I would argue that is the vocation of the Christian to be ready to be just such, I congratulated her, and I hope that those reading this Reflection would have done the same.

We could debate long about what has caused the collapse of family life. I hold the media – the MSM as it is often now called – responsible for much of this misery. Christians would be striking a major blow for decency – I do not even say Christian standards – by refusing to buy in to such rubbish. But it is far too simple just to point the finger elsewhere. The Times newspaper once posed the question “What’s wrong with the world?” and the writer G K Chesterton wrote the following letter ” Dear Sir, I am, Yours faithfully.” We must all be prepared to acknowledge that because none of us is perfect we too are caught up in the pain and brokenness that typify much of personal life in the western world today. 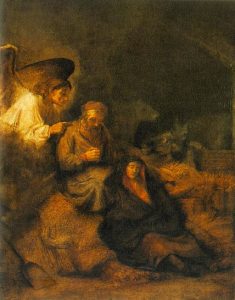 Rembrandt, The Dream of St Joseph, around 1650, Public domain.

It is salutary to measure family life in our own day against the example of the Holy Family. Given the circumstances of Mary’s pregnancy, the divorce option would have been open to Joseph – though he was not yet married to Mary, he was betrothed, which in Jewish custom was the point of commitment – a year’s betrothal always culminated in marriage unless one of the partners died or there was some kind of scandal, and that was undoubtedly the case here, as described by Matthew, when, before the marriage proper, Mary was found to be pregnant.

We do not know a lot about Joseph, though pious Christians of later ages have done their best to fill in the gaps in our knowledge, but in a sense, this passage says all we need to know, for it tells us that he was a righteous man and that he was a man of faith. What a powerful combination of qualities that is. We can find many people who have an innate sense of justice – indeed it is rumoured to be a particularly British quality – how else would the word “le fairplay” have entered the French language – but without a lively faith in God, to give justice its context and its meaning, justice can at best seem unfeeling and, at worst, spiteful and vengeful. Justice on its own in this situation would require that Mary be punished: faith, bolstered by Joseph’s dream of the angel, in fact dictates a totally different course of action – not merely no divorce, but the acceptance of Mary, pregnant though she was.

And acceptance is one of the keys to any successful relationship. It is fundamental to the Christian life to believe that Jesus accepts us just the way we are – after all, if he’d waited till we were perfect, he wouldn’t have had to die for us, would he? And if he accepts us, then we too must be ready to accept others for the sake of Jesus. If Joseph could accept Mary in spite of the uncertainty, in spite of the shame, in spite of the wagging tongues and pointing fingers, then we too are bound in duty and love to be of a mind to accept one another, spouses, family members, fellow Christians and those beyond, testing though this often is.

Reflection for Septuagesima Sunday Matthew 20;1–6 and Matthew 5;13–20. This reflection was provoked by a message... END_OF_DOCUMENT_TOKEN_TO_BE_REPLACED

Blessed are those who thirst for righteousness Matthew 5;6 Reflections at the end of January The... END_OF_DOCUMENT_TOKEN_TO_BE_REPLACED

The Feast of the Baptism of the Lord John 1;29-34 Psalm 42 speaks of a soul... END_OF_DOCUMENT_TOKEN_TO_BE_REPLACED

Solemnity of the Epiphany of the Lord John 1;1-14 Epiphany is one liturgical drama. It begins... END_OF_DOCUMENT_TOKEN_TO_BE_REPLACED

The Holy name of Jesus Luke 2;15-21 One of the great moments for a parent is... END_OF_DOCUMENT_TOKEN_TO_BE_REPLACED

Solemnity of the Nativity of the Lord John 1;1-14 Writing a homily for Christmas is made... END_OF_DOCUMENT_TOKEN_TO_BE_REPLACED

The Fourth Sunday of Advent Matt 1;18-25 I had a shock during the week. No, it... END_OF_DOCUMENT_TOKEN_TO_BE_REPLACED

The Third Sunday of Advent Matt 11;2-11 Two figures prepare us for the coming of Jesus... END_OF_DOCUMENT_TOKEN_TO_BE_REPLACED

The Second Sunday of Advent Matt 3;1-12 “Prepare the way for the Lord” cried John the... END_OF_DOCUMENT_TOKEN_TO_BE_REPLACED

Advent Sunday Matt 24;37-44 The writer Rod Dreher begins his book The Benedict Option with these... END_OF_DOCUMENT_TOKEN_TO_BE_REPLACED

Sunday before Advent, Christ the King Luke 23;33-43 In six months, Britain will witness the coronation... END_OF_DOCUMENT_TOKEN_TO_BE_REPLACED

2nd Sunday before Advent Remembrance Sunday Luke 21;5-19 One of the saddest things about growing old... END_OF_DOCUMENT_TOKEN_TO_BE_REPLACED

3rd. Sunday before Advent Luke 20;27-38 The Reflections using Luke’s gospel will end with the final... END_OF_DOCUMENT_TOKEN_TO_BE_REPLACED

All Saints Tide Would you like to be a saint? The whole idea of sainthood arouses... END_OF_DOCUMENT_TOKEN_TO_BE_REPLACED