The Solemnity of St. Olaf was celebrated as a major church feast in the Nordic countries until the Reformation. Then in the late 19th and the early 20th century a renewed interest in Olsok (“Olaf’s Vigil”) aroused, and on the 29th of July 1930 the feast was reintroduced in connection with the official celebration of the 900th anniversary of St. Olaf’s death at the battle of Stiklestad in 1030. Today Olsok is celebrated widely across the Nordic countries with church ceremonies and secular cultural festivals.

St. Olaf was the first saint to be recognised in Scandinavia. His canonisation was performed in Nidaros by the English Bishop Grimketel only a year after his death, and in 1164 the canonisation was confirmed by Pope Alexander III. He is also a canonised saint in Orthodoxy and therefore one of the last famous Western saints before the Great Schism. 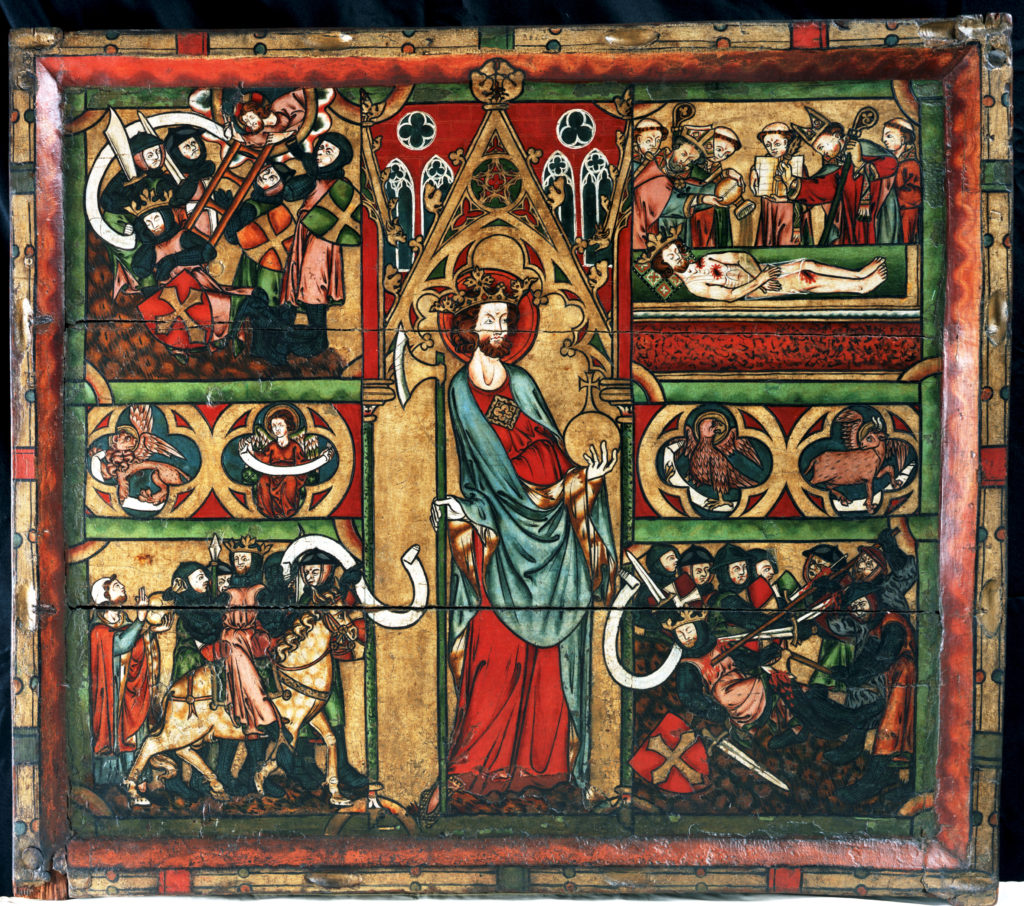 Within the Nordic region, the shrine of St. Olaf in Nidaros was the oldest known and most important destination for pilgrims. Churches were dedicated to his name from Greenland to Constantinople.

The oldest surviving painting of Saint Olaf, around 1160 AD, is on a column in the Nativity Church in Bethlehem. The number of Olaf churches and chapels reminds us that the Saint Olav tradition once flourished all over northern Europe. Prior to the Reformation, we know of at least 340 Olaf churches and Olaf chapels of which 288 were outside Norway. In Sweden, more than 75 churches were dedicated to Saint Olaf, in Denmark around 20 and in Finland at least 13.

Not least in England was this saint popular, with seven churches dedicated to him in London alone. It is interesting to note that the oldest liturgical texts about St. Olaf were written in England. Typologically, St. Olaf belongs to a group of Royal saints, such as Edward the Confessor.

Today Olaf Haraldson’s sainthood is in some quarters met with irony and scepticism. The question is: Can a viking mercenary who died in his thirtieth major battle with so much blood on hands be called a saint? However, the Medieval Church did not necessarily evaluate the criteria for sainthood as an expression of personal «holiness». Thus St. Olaf was honoured as martyr and not for his personal piety.

St. Olav honoured on his feast day at the West Front of the Nidaros Cathedral.

The complicated personality of the viking king is clearly expressed in the iconography of St. Olaf. His attributes are a crown, an axe and an allegorical creature underneath his feet. The crown places him among Christian kings like Constantine and Charlemagne. The axe expresses on the one hand his authority as lawmaker, but serves also as a reminder that the axe was the instrument of his martyrdom. The dragon under his feet carries a face like his own and is usually interpreted as an allegorical expression of his struggle for a better self. In short, St. Olaf was seen to be a soldier of God protecting laws of society, a royal martyr and a saint who triumphed over evil.

Last Sunday of the Year John 18;33–37 Since 1925 Pentecost ends with the solemn Christian acclamation... END_OF_DOCUMENT_TOKEN_TO_BE_REPLACED

Sunday October 31st this year will be widely celebrated as All Saints Sunday. This is of... END_OF_DOCUMENT_TOKEN_TO_BE_REPLACED

The Solemnity of St. Olaf was celebrated as a major church feast in the Nordic countries... END_OF_DOCUMENT_TOKEN_TO_BE_REPLACED

When St. Peter on Pentecost Day explains to the Jews that Christ is the Messiah, he... END_OF_DOCUMENT_TOKEN_TO_BE_REPLACED

The Psalmist in his prophecy about Easter Day (Ps 118:24) says: «This is the day the... END_OF_DOCUMENT_TOKEN_TO_BE_REPLACED

How romantic it all seems, as recorded in Luke’s Gospel. The baby Jesus brought by Mary... END_OF_DOCUMENT_TOKEN_TO_BE_REPLACED

«In the fullness of time God sent forth his son, born of a woman, born under... END_OF_DOCUMENT_TOKEN_TO_BE_REPLACED

This meditation reflecting upon the meaning of the Creed’s word of the Church as “one” and... END_OF_DOCUMENT_TOKEN_TO_BE_REPLACED