Bread – The Staff of Life

The Friends of Jesus

Jesus travelled with twelve disciples, but also had a considerable group of friends in Galilee and Jerusalem upon whom he relied. There are, men, women, singles and couples, who come into prominence before his trial and after his resurrection. Mary the mother of John Mark, cousin of Barnabas offered a home large enough for the Last Supper, [Colossians 4;10]. And Cleopas, mother of Jude and James the less in Emmaus, hosted gatherings, where many of the 70 apostles could meet. [Acts 10;1-20]

The large following of women who followed the cross and witnessed the resurrection will have gathered in these homes. Among them all was the home of Martha and Mary whose brother Lazarus, Jesus had raised from the dead. This was a special place of refuge and hospitality and the setting for crucial events that precede the Crucifixion. It was the home in which a refreshing form of “godly friendship” is manifested, and which feels missing in our modern world. 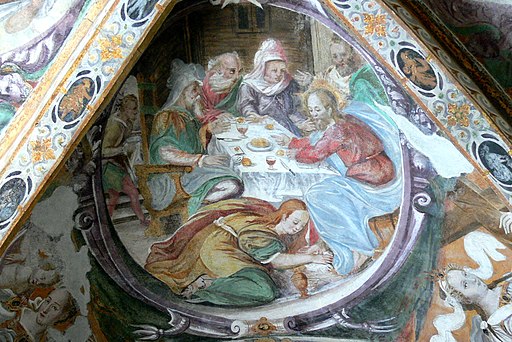 Today it is increasingly difficult for men and women to have wholesome friendships, which Cicero 50 years BC called “the foundation of social order”. Professionals like teachers in schools are prevented from physically consoling distressed children. We are told that those offering hospitality to refugees and orphaned children from Eastern Europe must now follow rules of safeguarding. What was so different among the friends of Jesus or even St. Paul?

Threading through the Gospel narratives and Epistles is the concept of “godly love”. St. John records Jesus saying “Love one another as I have loved you. Greater love has no one than this, than to lay down one’s life for his friends. You are my friends.” [John 15;12-14] It becomes clear in the very final meeting of the risen Christ with his disciples by the Sea of Galilee that Jesus speaks not sentimentally, about loving bonds but specifically (John 21;ff).

Jesus asks Simon Peter, “do you love me?” The word love is “agape” – costly love. Peter answers “Yes, I love you”, but he uses the word “filia”, the loyal love of a friend and brother. Jesus asks for the deepest love of all that is his own, taking friendship to its limits. He is asking for “godly love” among his followers. This was the love that was displayed by the two Bethany sisters and Lazarus. They were entirely different in their devotion to Jesus. Martha was hospitable and practical, Mary attentive and devotional in her act of anointing her Lord’s feet with expensive perfume. Meanwhile in the background is the cynical Judas, keeper of the community funds believing all this was an extravagance even as he was preparing to betray his friend for silver.

Aristotle was right, a loyal friend is worth 10,000 relatives! Today godly love and friendship has become a devalued casualty of our culture, there has also been a loss of moral compass diluting the foundations of friendship. Virtues like loyalty, trust, fidelity, justice, have become overshadowed by stressing the importance of self fulfilment and feelings. Friendship enabled society hitherto to better police itself than is the case today. Without moral order, families collapse, crime surges, together with self harm, social disorder and mental instability. Progressive politicians and intellectuals have continually fed this instability. The friendship of the Bethany sisters reminds us of an altogether higher level of human relationships based on godly and moral sense. Throughout the New Testament the writers continue to use the word “agape”- godly love when they speak about the greatest commandment, “that we should believe on the name of His Son Jesus Christ and love one another, as He gave us commandment. [John 3;23ff]

Reflection for Septuagesima Sunday Matthew 20;1–6 and Matthew 5;13–20. This reflection was provoked by a message... END_OF_DOCUMENT_TOKEN_TO_BE_REPLACED

Blessed are those who thirst for righteousness Matthew 5;6 Reflections at the end of January The... END_OF_DOCUMENT_TOKEN_TO_BE_REPLACED

The Feast of the Baptism of the Lord John 1;29-34 Psalm 42 speaks of a soul... END_OF_DOCUMENT_TOKEN_TO_BE_REPLACED

Solemnity of the Epiphany of the Lord John 1;1-14 Epiphany is one liturgical drama. It begins... END_OF_DOCUMENT_TOKEN_TO_BE_REPLACED

The Holy name of Jesus Luke 2;15-21 One of the great moments for a parent is... END_OF_DOCUMENT_TOKEN_TO_BE_REPLACED

Solemnity of the Nativity of the Lord John 1;1-14 Writing a homily for Christmas is made... END_OF_DOCUMENT_TOKEN_TO_BE_REPLACED

The Fourth Sunday of Advent Matt 1;18-25 I had a shock during the week. No, it... END_OF_DOCUMENT_TOKEN_TO_BE_REPLACED

The Third Sunday of Advent Matt 11;2-11 Two figures prepare us for the coming of Jesus... END_OF_DOCUMENT_TOKEN_TO_BE_REPLACED

The Second Sunday of Advent Matt 3;1-12 “Prepare the way for the Lord” cried John the... END_OF_DOCUMENT_TOKEN_TO_BE_REPLACED

Advent Sunday Matt 24;37-44 The writer Rod Dreher begins his book The Benedict Option with these... END_OF_DOCUMENT_TOKEN_TO_BE_REPLACED

Sunday before Advent, Christ the King Luke 23;33-43 In six months, Britain will witness the coronation... END_OF_DOCUMENT_TOKEN_TO_BE_REPLACED

2nd Sunday before Advent Remembrance Sunday Luke 21;5-19 One of the saddest things about growing old... END_OF_DOCUMENT_TOKEN_TO_BE_REPLACED

3rd. Sunday before Advent Luke 20;27-38 The Reflections using Luke’s gospel will end with the final... END_OF_DOCUMENT_TOKEN_TO_BE_REPLACED

All Saints Tide Would you like to be a saint? The whole idea of sainthood arouses... END_OF_DOCUMENT_TOKEN_TO_BE_REPLACED