Bread – The Staff of Life

The Risen Christ In Our Midst

In my student days many seminarians were helped by the work of London’s Keston College who gave support and publicity to dissidents in the Soviet Union. Many of these were martyred and many have since died, but their suffering deepened faith and courage all over the world. Theirs was a courageous Easter faith witnessed especially by priests like Father Gleb Yakunin, a disciple of Father Alexander Men, who was sentenced to ten years imprisonment under article 70 for Anti-Soviet activity. He had continually written letters condemning Patriarch Alexi II and President Khrushchev for the persecution of Christians and the abolition of Easter. Father Gleb by his ministry restored the moral authority of Orthodoxy in a way that is needed again today. This high doctrine of The Resurrection in Soviet days survived the culture of atheism particularly in monasteries like St. Nicholas in Makachevo in Western Ukraine in which the Abbess Mother Paraskeva who died 1967 publicly declaring her hope in the resurrection.

Even now, their successors continue to accept that suffering in both Russia and Ukraine at the hands of the Russian Government, supported by highest ranking Christian leaders, enforcing a new Code of Administrative Offenses of the Russian Federation, as before, prohibited Christians from expressing their convictions that the shedding of innocent blood in Ukraine is an error. This Eastertide is a time to express solidarity and stand with our courageous brethren in both countries, not only for what they have given in the past but what they now are shouldering in the present persecution. With them we all cry “Christ is in our midst, He is risen indeed”. 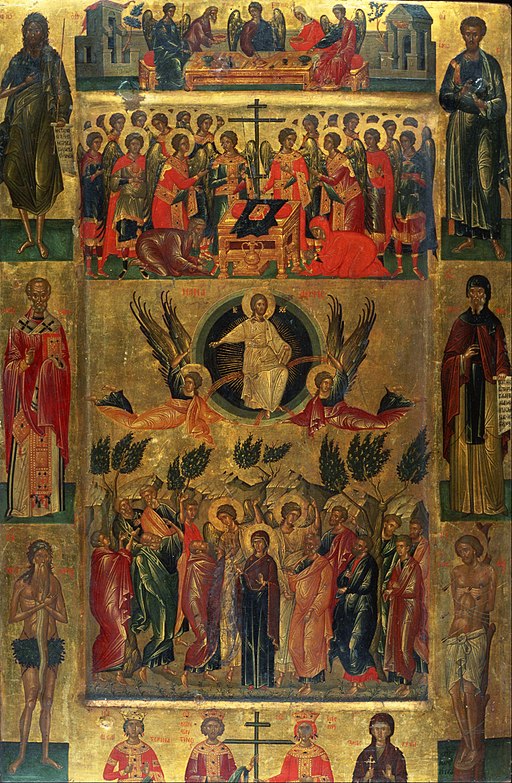 Ascension of Christ with the Hetoimasia, Andreas Ritzos (1421-1492),
Public domain, via Wikimedia Commons

Easter proclaims the Risen Christ for a season of 40 days rather than just one day, because it is so central to the Christian faith. Easter is not just about personal survival or the preservation of myself, but about the transfiguring of self, which culminates in a union with God. The first martyr Stephen revealed this as his eyes saw the crowd stoning him to death, his heart saw the risen Christ. The scale and consequence of what Jesus accomplished by his death and resurrection is absolutely massive. By descending to the place of despair and darkness, of horror and alienation, brings light and love even to the depths of hell. St Paul saw clearly that without this the faith, life is futile and creation is in continual bondage. [Romans 8] So many persecuted Christians over the ages have seen this too as will those who on every continent in increasing numbers today see the futility of a world with no way of deliverance from the evil that has to be defeated in every age. The risen Christ in our midst is the Christian conviction that in Christ there is a new creation in which everything can be restored. It is based on the promises of Christ ringing in our ears, “My sheep hear My voice, and I know them, and they follow Me. I give them eternal life, and they shall never perish; neither shall anyone snatch them out of My hand. [John 10;28]

Dostoyevsky (1821-1881) in his day witnessed the effects on society where people live as if God is dead and Christ powerless. He knew how totalitarian governments flourish taking for themselves the place of God, setting up their own laws, where cruelty becomes justified and wrong becomes right. Dostoyevsky went on to say “the secret of man’s being is not only to live but to have something to live for”. Micro cultures of love, kindness, humanity will survive whenever the Easter faith is alive, as we read again and again of hundreds of miracles where people endured the cruel labour camps of the Soviet system such as the criminal Vasily Ivanovitch Koslov imprisoned for 15 years for dreadful crimes was transformed by sheer purity and kindness of Christian inmates who were witnesses to the Risen faith. Christ was not dead and for believing this Vasily endured a further 25 years. May the Risen Christ be in the midst of all faithful believers especially those on every continent who face these present testing times.

The Dormition of the Mother of God Luke 14;39-56 The 15th August has since the late... END_OF_DOCUMENT_TOKEN_TO_BE_REPLACED

7. Sunday after Trinity Luke 12;13-21 The abolition of man is the title of a lecture... END_OF_DOCUMENT_TOKEN_TO_BE_REPLACED

6. Sunday after Trinity Luke 11;1-13 Ask any priest and he could tell you horror stories... END_OF_DOCUMENT_TOKEN_TO_BE_REPLACED

With the reopening of the borders in Europe in March the Nordic Catholic Church was finally... END_OF_DOCUMENT_TOKEN_TO_BE_REPLACED

4. Sunday after Trinity Luke 10;27-35 Who is my neighbour is the hard question a lawyer... END_OF_DOCUMENT_TOKEN_TO_BE_REPLACED

2. Sunday after Trinity Luke 9;51-62 “Not Fit for Service” is an English phrase meaning, useless... END_OF_DOCUMENT_TOKEN_TO_BE_REPLACED