We are the masters now

This reflection was written before the present suffering of the people of Ukraine and neighbouring countries. A terrible man made crisis with military, economic, psychological and spiritual consequence. The Christian world will also suffer as a result and we offer our prayers and heartfelt concern for our fellow Christians and the Ukrainian people who will suffer as a consequence of human wickedness.

Another Lent begins and the two year pandemic is still with us contributing everywhere high levels of anxiety. This is happening in societies that have dethroned God giving mankind sovereignty instead. The weeks of Lent are a time for thinking about this predicament, reflecting on the suffering, Crucifixion and Resurrection of Jesus the Christ. How can we understand these crucial issues of life, the false and the true, the suffering and the dying, questions driving anxiety to skyrocketing levels?

While daily news is preoccupied with fear, the politics of health and entitlements, people scramble for security and comfort. There are serious questions that should be asked when sophisticated societies are driven by mass psychosis while at the same time religious instinct collapses. Significantly, some commentators are asking silent Christian leaders to step up and have courage and assert the place of faith and the need for a transcendent vision for humanity to be on their agenda rather than placing so much hope in the new religions of health services and vaccines as the only way to provide “wellbeing”.

One of England’s most sensitive bishops, Michael Ramsey (1904 –1988) wrestled all his life to make sense of the problem of suffering. Why would the living God allow terrible things to happen to his only brother who died while Ramsey was a seminarian and why so quickly afterwards, his two parents were involved in a motor cycle accident killing his mother and the father injured? Who has not asked such questions in similar circumstances. Michael Ramsey turned to the Transfiguration of Jesus on the Mountain in his search to understand these tragedies. He began to see the Transfiguration as a gateway to the whole gospel narrative because “transformation” was at its heart. Suffering is no longer a struggle to be endured but a creative promise of change. 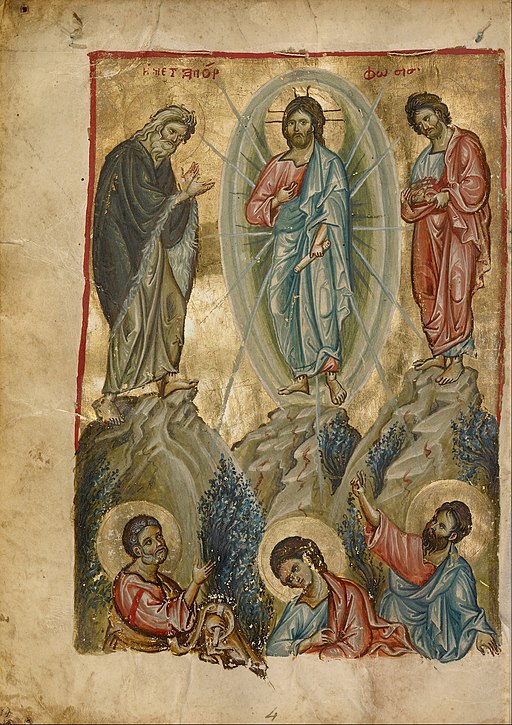 The Transfiguration appears at first to be a mystical experience for the disciples to see the radiant Jesus endorsed by the key figures from the Old Testament, overshadowed by God the Father and Holy Spirit. But for the Church it was seen as one of the most profound events recorded in all four gospels read several times each year as a revelation at many levels. It brings together the living and the dead as one in Christ. It reveals a unity between the Old and New Testament, it manifests the Blessed Trinity. But in preparation for Lent, it is the suffering and glory of Christ we consider and what this means for believers living through anxious times.

The transfiguration teaches us that suffering is real and cannot be removed for life but it can be transformed. Living in a fragile world with conflict, suffering and death can be changed or “re tooled” because in the life of faith we have access to a power beyond ourselves. Transformation is the releasing of the power of the Holy Spirit to ignite change that will blossom into new life.

New Testament writers like John use transfiguration language, “we are children of God… we shall be like Him, for we shall see Him as He is [1 John 3;2] or Paul, “do not be conformed to this world, but be transformed by the renewing of your mind” [Romans 12;1]. Paul continually taught that in the old life results in the spirit of fear which is so destructive, but is transformed when bonded with divine energy into a new life. “I consider that the sufferings of this present time are not worthy to be compared with the glory which shall be revealed in us. For the earnest expectation of the creation eagerly waits for the revealing of the sons of God” [Rom 8;18-19]. “Behold, I tell you a mystery: We shall not all sleep, but we shall all be changed, in a moment, in the twinkling of an eye” [I Corinth 15;51-52].

Lent brings this central theme of the vision of Christ before us and the Holy Spirit within us in anticipation of change. But with the first disciples we cannot remain permanently on the mountain but must journey onwards on the via dolorosa to the green hill of Calvary to witness the passion, of Christ that transformed them from the old Adam to share with the Lord the splendour of his glorious divinity.

Reflection for Septuagesima Sunday Matthew 20;1–6 and Matthew 5;13–20. This reflection was provoked by a message... END_OF_DOCUMENT_TOKEN_TO_BE_REPLACED

Blessed are those who thirst for righteousness Matthew 5;6 Reflections at the end of January The... END_OF_DOCUMENT_TOKEN_TO_BE_REPLACED

The Feast of the Baptism of the Lord John 1;29-34 Psalm 42 speaks of a soul... END_OF_DOCUMENT_TOKEN_TO_BE_REPLACED

Solemnity of the Epiphany of the Lord John 1;1-14 Epiphany is one liturgical drama. It begins... END_OF_DOCUMENT_TOKEN_TO_BE_REPLACED

The Holy name of Jesus Luke 2;15-21 One of the great moments for a parent is... END_OF_DOCUMENT_TOKEN_TO_BE_REPLACED

Solemnity of the Nativity of the Lord John 1;1-14 Writing a homily for Christmas is made... END_OF_DOCUMENT_TOKEN_TO_BE_REPLACED

The Fourth Sunday of Advent Matt 1;18-25 I had a shock during the week. No, it... END_OF_DOCUMENT_TOKEN_TO_BE_REPLACED

The Third Sunday of Advent Matt 11;2-11 Two figures prepare us for the coming of Jesus... END_OF_DOCUMENT_TOKEN_TO_BE_REPLACED

The Second Sunday of Advent Matt 3;1-12 “Prepare the way for the Lord” cried John the... END_OF_DOCUMENT_TOKEN_TO_BE_REPLACED

Advent Sunday Matt 24;37-44 The writer Rod Dreher begins his book The Benedict Option with these... END_OF_DOCUMENT_TOKEN_TO_BE_REPLACED

Sunday before Advent, Christ the King Luke 23;33-43 In six months, Britain will witness the coronation... END_OF_DOCUMENT_TOKEN_TO_BE_REPLACED

2nd Sunday before Advent Remembrance Sunday Luke 21;5-19 One of the saddest things about growing old... END_OF_DOCUMENT_TOKEN_TO_BE_REPLACED

3rd. Sunday before Advent Luke 20;27-38 The Reflections using Luke’s gospel will end with the final... END_OF_DOCUMENT_TOKEN_TO_BE_REPLACED

All Saints Tide Would you like to be a saint? The whole idea of sainthood arouses... END_OF_DOCUMENT_TOKEN_TO_BE_REPLACED