The Giver Of Life

New developments in the Nordic Catholic Church in Europe

“Who is my neighbour?”

Who is my neighbour is the hard question a lawyer put to Jesus on the subject of living in the light of eternal life. The difference between Jesus and us is that his love is unlimited, and embraces the whole of creation, whereas we pick and choose whom to love. A little earlier in Luke’s Gospel we hear Jesus dealing with easy neighbourliness, saying in effect “So you think you’re doing well because you choose to love people who love you, or who like you, or even people who are like you. Big deal”. The Commandment to Love your neighbour in both Old and New Testament provokes the question, who is my neighbour?

By and large, we can’t pick and choose neighbours. There have been TV documentaries about the neighbours from hell; some years ago there was even a Comedy series on British television called, with just the slightest hint of irony, “Love thy neighbour”, which pointed out the very real tensions that can exist when people of different races and cultures are thrown together, and it is no use in the name of political correctness or any other so called orthodoxy of the day to pretend that such things don’t go on. It can also be particularly difficult for Christians thinking they live in Christian countries: it is debatable whether many western countries can think in such terms today? But we can be sure that those who are known to be Christians will be judged by their words and deeds by those who are not; that applies to the clergy and laity as well. The next time we are dealing with a particularly difficult neighbour, or shopkeeper, bear in mind, we will be judged. 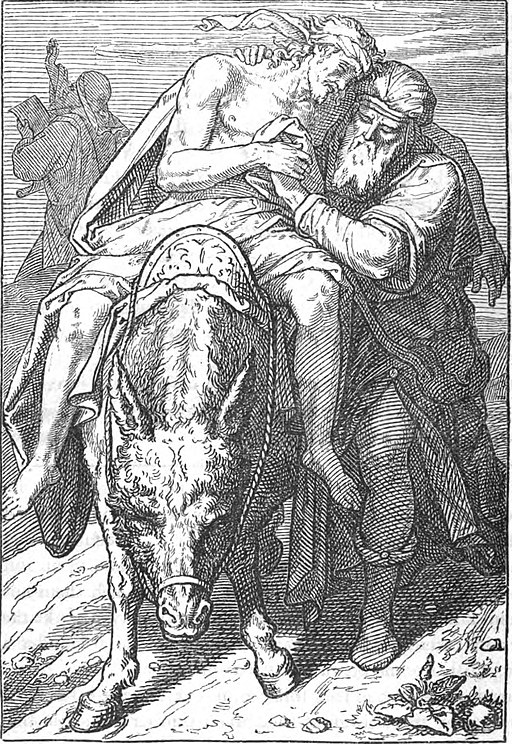 Unknown author, Public domain, via Wikimedia Commons.
From The story of the Bible from Genesis to Revelation, 1873.

The parable of the Good Samaritan used by Jesus, highlights the centuries-old dispute between the Jews and the Samaritans. The Jews despised the Samaritans for their mixed race, for their own brand of Judaism, and the prejudices and feelings were warmly reciprocated by Jews. That story has been repeated countless times the world over even in our times in Bosnia, Africa the Middle East and now in Russia and Ukraine. The British witnessed this in the past troubles of Northern Ireland, which we hope and pray will not be repeated. Yet not so long ago in Ireland, the behaviour of some, though not all, so-called Christians there, including some in prominent leaders was a disgrace, and a denial of the teaching of Jesus we reflect on in Luke’s Gospel. The Catholics are the neighbours of the Protestants, the Protestants are the neighbours of the Catholics, yet they seemed caught in a three hundred years old time warp of hatred. Such behaviour shames all of us who are Christians. It will not do for the world will damn us all together.

We cannot deny our vocation to be the holy people of God, a vocation that does not allow us the luxury of carrying on with our prejudices like everyone around us. The Gospel teaching does not allow us to carp and criticise or divide and abuse. Christians are challenged to try to see the world through the eyes of those who are making life difficult for us. It does challenge us to turn the other cheek, calling us to love the unlovely, which can be frightening. That’s why, before we start thinking about how we’re going to live in harmony with that difficult neighbour next door, we need to take stock of our own lives, our attitudes, our openness to the renewing power of the Gospel: a life centred on Christ is a life renewed, a life in which love and joy and peace will be known, a life where even the neighbours from hell can begin to be loved for Christ’s sake, for he came as much for them as for you and me.

Reflection for Septuagesima Sunday Matthew 20;1–6 and Matthew 5;13–20. This reflection was provoked by a message... END_OF_DOCUMENT_TOKEN_TO_BE_REPLACED

Blessed are those who thirst for righteousness Matthew 5;6 Reflections at the end of January The... END_OF_DOCUMENT_TOKEN_TO_BE_REPLACED

The Feast of the Baptism of the Lord John 1;29-34 Psalm 42 speaks of a soul... END_OF_DOCUMENT_TOKEN_TO_BE_REPLACED

Solemnity of the Epiphany of the Lord John 1;1-14 Epiphany is one liturgical drama. It begins... END_OF_DOCUMENT_TOKEN_TO_BE_REPLACED

The Holy name of Jesus Luke 2;15-21 One of the great moments for a parent is... END_OF_DOCUMENT_TOKEN_TO_BE_REPLACED

Solemnity of the Nativity of the Lord John 1;1-14 Writing a homily for Christmas is made... END_OF_DOCUMENT_TOKEN_TO_BE_REPLACED

The Fourth Sunday of Advent Matt 1;18-25 I had a shock during the week. No, it... END_OF_DOCUMENT_TOKEN_TO_BE_REPLACED

The Third Sunday of Advent Matt 11;2-11 Two figures prepare us for the coming of Jesus... END_OF_DOCUMENT_TOKEN_TO_BE_REPLACED

The Second Sunday of Advent Matt 3;1-12 “Prepare the way for the Lord” cried John the... END_OF_DOCUMENT_TOKEN_TO_BE_REPLACED

Advent Sunday Matt 24;37-44 The writer Rod Dreher begins his book The Benedict Option with these... END_OF_DOCUMENT_TOKEN_TO_BE_REPLACED

Sunday before Advent, Christ the King Luke 23;33-43 In six months, Britain will witness the coronation... END_OF_DOCUMENT_TOKEN_TO_BE_REPLACED

2nd Sunday before Advent Remembrance Sunday Luke 21;5-19 One of the saddest things about growing old... END_OF_DOCUMENT_TOKEN_TO_BE_REPLACED

3rd. Sunday before Advent Luke 20;27-38 The Reflections using Luke’s gospel will end with the final... END_OF_DOCUMENT_TOKEN_TO_BE_REPLACED

All Saints Tide Would you like to be a saint? The whole idea of sainthood arouses... END_OF_DOCUMENT_TOKEN_TO_BE_REPLACED